Baekje’s kiln in Namhyeon-dong is 1,988㎡ in size, and it was used to produce pottery during the Baekje Dynasty. It was discovered in April 1973 and designated as Historic Site No. 247 on April 10, 1976. As this area has red clay in abundance, it must have been a perfect place to produce pottery.

Since the discovery of pottery fragments, burned soil and ash, as well as of lattice-patterned pottery, the kiln was considered to belong to the late Baekje Period. However, according to the result of an excavation conducted by the Museum of Art, Seoul National University in October 2006, it is estimated to be a dump site related to a kiln belonging to the late United Silla Period (9th century), rather than Baekje. Some scholars suggested that kilns of the United Silla Period might have existed outside the boundary of the historic site. 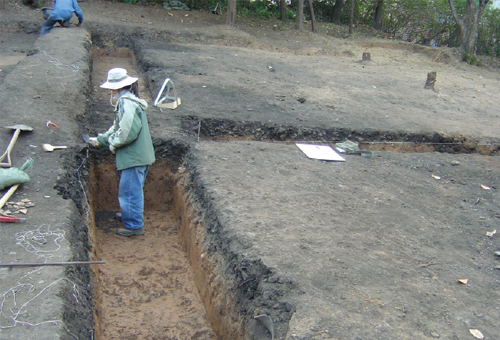