Nakseongdae Park was constructed to commemorate General Gang Gam-chan (948∼1031) who was a famous commander during the Goryeo Dynasty. In 1973, when Seoul City reorganized its surrounding area, it built a shrine and auxiliary buildings. The shrine was built on the east side of the park to enshrine the portrait of the admiral and it was named as Anguksa. In the front, Angungmun (outer gate) and Naesammun (inner gate) were erected. Inside the gate, the Three-story Stone Pagoda of Nakseongdae was moved from the birthplace of the admiral and a memorial stone was erected across from the pagoda. Anguksa was built by replicating the Muryangsujeon Hall of Buseoksa Temple in Yeongju which represents the wooden architectural style of the Goryeo dynasty. The octagonal roof gives off a majestic feel. 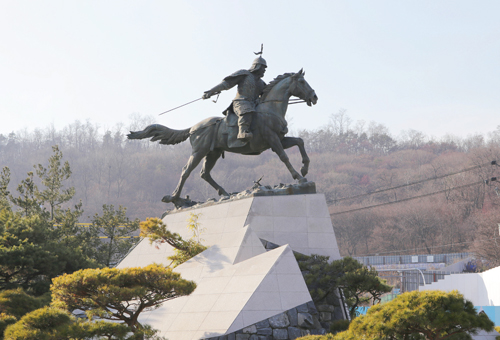