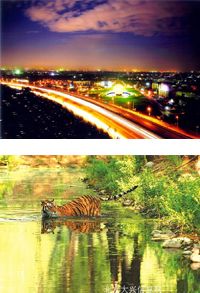 Daxing District is located in the southern suburbs of Beijing. It is the center of the Bohai Economic Rim. It is a 90-minute drive from Tianjin New Port and it is located within a 10㎞ straight-line distance from downtown Beijing. It is like the southern gate of Beijing. It was established as Xian during the Qin Dynasty and named as Daxing during the Jin Dynasty. Later, it functioned as an important satellite city for 800 years based on its rich cultural resources and long history. In 2001, it was elevated to a district.

Comparable to its nickname “the south gate of Beijing,”Daxing has a well-developed transportation system: five train stations, four railroad lines, and expressways. Some 50 major roads pass through Daxing which facilitates movement to major cities, as well as within Daxing. On the south side of Daxing, you can find Beijing Nanyuan Airport.

Daxing is leading major industries through its industrial areas, such as Beijing Bio Engineering & Medical Industrial Complex, the Beijing Mercedes-Benz Automobile Industrial Complex, and Beijing Precision Chemical Industrial Base. It is also leading the ecological agriculture and tourism industries based on its abundant natural resources and historical cultural resources. It is attracting a lot of attention as an ecological tourist attraction with the Wild Animal Park, Forest Park, and Wildlife Park. Daxing also features the People’s Public Security University of China, Beijing Petrochemical Technology Research Center and Beijing Graphic Telecommunication Research Center, as well as the Printing Museum and the Watermelon Museum.

The Royal Borough of Kingston upon Thames in London, England 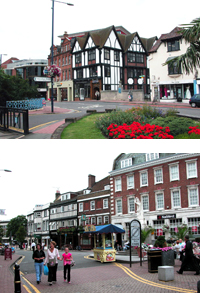 Kingston is situated on the southwest outskirts of London and has been existing as an independent autonomous government since the 13th century. After integrating its neighboring areas in 1965, it was incorporated into a borough of London. The title “Royal” signifies that Kingston has autonomy granted by the order of the King. England has 6 autonomous local governments, and London has 4 Royal Boroughs and Kingston is one of them.

Kingston is home to the second largest shopping center in London and the 12th largest shopping center in England. It is a rich area where many high income earners live, so housing prices and local taxes are very high. New Malden in the boroughs of Kingston is populated by the largest number of Koreans, and it plays a central role in the Korean community in England and Europe. Kingston has several prestigious public and private schools, including Kingston University and KingstonCollege. 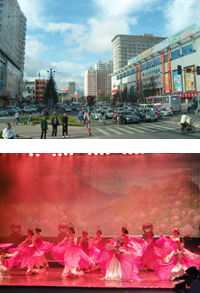 Yanji City belongs to Yanbian Joseon Autonomous Prefecture in Jilin Province. It is the center of politics, economy and culture. It has an ordinance which regulates that all business names and official documents must be in Chinese and Korean languages. It is also the urban center of the Tumen River Area Development Programme (TRADP) of the UN. It has abundant resources of forest, mining and specialty produce. It has been making rapid economic development since opening up to the world. At present, secondary and tertiary industries are significant in Yanji City. Due to its geographical advantages, Yanji City is an important traffic hub for railways, roads and air traffic,

The northern, southern, and eastern sides of the city are surrounded by mountains, while the western side is open terrain. Yanji City’s average elevation is relatively low which is only 150m. According to the geographical features of the city, the northern side is high and the southern side mainly consists of low hills. The streams in Yanji City are tributaries of the Tumen River, and major streams include BuerhatongRiver, Yanji River, and Hailan River.

Even though Yanji City is not a historic cultural place, its beautiful natural scenic attract many local and overseas tourists. Around Yanji City, beautiful Jinpo Lake is in the north. It has eight major scenic views such as Diaoshuilou Falls and Dagu Mountain. It also has the nation’s holy mountain Changbai Mountain (Baekdusan), expansive wild forest and Tumen River, China-Russia border scenery, Joseon Folk Village, and Changbai Mountain Winter Ski Resort and Hailan River Rafting. 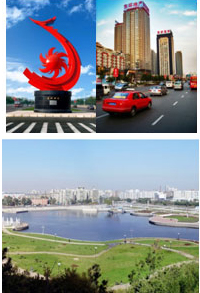 Tiexi District, which is situated in the southwest of Shenyang City, is transforming from an old industrial base into a new industrial base after several years of exploration and practices since the establishment of Tiexi New District that saw the integration of Tiexi District and the Shenyang Economic and Technological Development Zone on June 18, 2002. It has been selected as one of 18 model districts in China during 30 years of reformative opening since 2008, and it received a LivCom Award from the UN. In 2009, the National Development and Reform Commission (NDRC) officially approved >The Industrial Development Planning of Tiexi Equipment Production Industrial Complex< and promoted it as a national strategy. Tiexi New District was selected as a ’national sustainable development experimental zone’, the ’national new industrial model base’, the ’national science and technology advancement model zone’, the ’national primary knowledge property right excellence zone’, and the ’nationwide mandatory education standardization model zone.’ It was also selected as one of’ China’s new 60 major landmarks.’

Since the establishment of Tiexi New District, Shenyang City has been achieving a high employment rate in various commercial sectors due to its big industrial and economic size and it is exhibiting high purchasing power. Currently, Tiexi New District is developing many commercial and residential areas, and renewing its old industrial area, restoring its pride in the process. 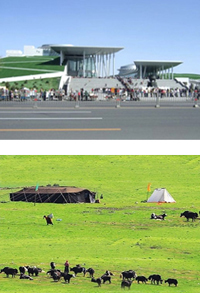 Hohhot City means “green city” in the Mongolian language. It is located on the north side of the Great Wall of China, being surrounded by Yin Mountain to the north, the Yellow River and Tumu Stream to the south. Diligent and brave ethnic groups in the northern regions created splendid cultures.For centuries, this green city has enjoyed prosperous times in wide pastures under a blue sky offering majestic natural beauty. Currently, Hohhot City is located 470km from Beijing in the east and 490km from Eriyen Qota which is an inland open port. It is the capital of Neimonggu Autonomous Region and it is the center of administration economy, culture, science & technology, education and banking in NeimongguRegion.