This tomb site belongs to Yi Gyeong-jik (1577~1640) who served as a minister during King Injo’s reign of the Joseon Dynasty, as well as to his two wives. His pen-name was Seokmun. After he passed the national examination in 1605(the 3th year of King Seonjo’s reign), he took up a government position. In 1627(the 5th year of King Injo’s reign),when Jeongmyo Horan (the Chinese Invasion of Joseon) brokeout, he demonstrated excellent diplomatic capabilities. Throughout his lifetime, he took on several government positions and was posthumously appointed as the minister position. He received a posthumous title “Hyomingong (meaning a ‘filial person’)” as recognition of his filial devotion to his parents. The memorial stone at the tomb site was erected in 1668 (the 9th year of King Hyeongjong). 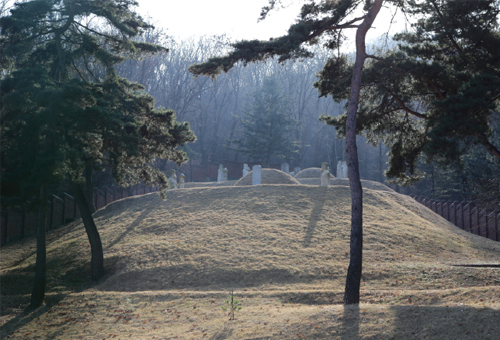