The tomb site belongs to Gang Sa-sang (1519~1581) who was a loyal official during the mid-Joseon Period, as well as to his wife. It has several stone statutes. Gang Sa-sang passed the preliminary state examination in 1543(the 38th year of King Jungjong’s reign) and passed the highest-level state examination in 1546(the 1st year of King Myeongjong’s reign). After then, he held several government positions, demonstrating his excellent capabilities. In 1578(the 11th year of King Seonjo’s reign), he was appointed as the second vice-premier and was later posthumously appointed as the first minister. His posthumous title is Jeongjeonggong. The memorial stone at the tomb site was erected during the 39th year of King Sukjong’s reign (1713). Around the tomb site, there is the tomb of General Gang Hong-rip (1560~1627) who served as governor of the five provinces during King Injo’s reign of the Joseon Dynasty, as well as the tombs of the Jinju Gang Clan, so they clearly show a change in the style of tombs and stone statutes. 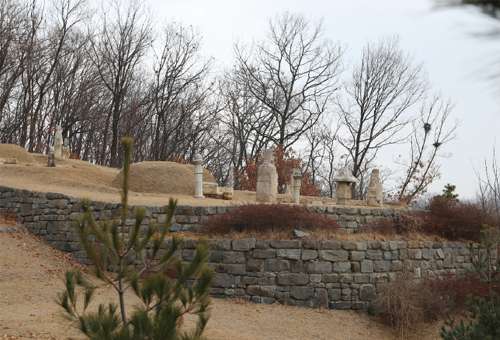